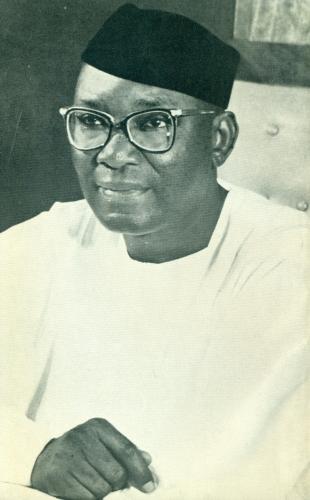 Nnamdi Azikiwe, PC, (16 November 1904 – 11 May 1996), usually referred to as “Zik”, was a Nigerian statesman who was Governor General of Nigeria from 1960 to 1963 and the first President of Nigeria from 1963 to 1966 (when Nigeria became a republic). Considered a driving force behind the nation’s independence, he came to be known as the “father of Nigerian Nationalism”. Born to Igbo parents in Zungeru in present-day Niger State, as a young boy he learned to speak Hausa (the main indigenous language of the Northern Region). Azikiwe was later sent to live with his aunt and grandmother in Onitsha (his parental homeland), where he learned the Igbo language. A stay in Lagos exposed him to the Yoruba language; by the time he was in college, he had been exposed to different Nigerian cultures and spoke three languages (an asset as president). Azikiwe traveled to the United States and attended Storer College, Columbia University, the University of Pennsylvania and Howard University before returning to Africa in 1934, where he began work as a journalist in the Gold Coast. In British West Africa, he advocated Nigerian and African nationalism as a journalist and a political leader.

Azikiwe was born on 16 November 1904 in Zungeru, Northern Nigeria. His first name means “my father is alive” in the Igbo language, and his parents were Igbo. His father, Obed-Edom Chukwuemeka Azikiwe (1879–1958), a native Onye Onicha, was a clerk in the British Administration of Nigeria who traveled extensively as part of his job. Azikiwe’s mother was Rachel Chinwe Ogbenyeanu (Aghadiuno) Azikiwe, who was sometimes called Nwanonaku and was the third daughter of Aghadiuno Ajie. Her family descended from a royal family in Onitsha, and her paternal great-grandfather was Obi Anazenwu. Azikiwe had one sibling, a sister named Cecilia Eziamaka Arinze. As a young boy, Azikiwe spoke Hausa, the regional language. His father, concerned about his son’s fluency in Hausa and not Igbo, sent him to Onitsha in 1912 to live with his paternal grandmother and aunt to learn the Igbo language and culture. In Onitsha, Azikiwe attended Holy Trinity School (a Roman Catholic mission school) and Christ Church School (an Anglican primary school). In 1914, while his father was working in Lagos, Azikiwe was bitten by a dog; this prompted his worried father to ask him to come to Lagos to heal and to attend school in the city. His father was sent to Kaduna two years later, and Azikiwe briefly lived with a relative who was married to a Muslim from Sierra Leone.In 1918, he was back in Onitsha and finished his elementary education at CMS Central School. Azikiwe then worked at the school as a student-teacher, supporting his mother with his earnings. In 1920, his father was posted back to southern Nigeria in the southeastern city of Calabar. Azikiwe joined his father in Calabar, beginning secondary school at the Hope Waddell Training College. He was introduced to the teachings of Marcus Garvey, Garveyism, which became an important part of his nationalistic rhetoric.

After attending Hope Waddell, Azikwe transferred to Methodist Boys High School in Lagos and befriended classmates from old Lagos families such as George Shyngle, Francis Cole and Ade Williams (a son of Akarigbo Remo). These connections were later beneficial to his political career in Lagos. Azikwe heard a lecture by James Aggrey, an educator who believed that Africans should receive a college education abroad and return to effect change.[14] After the lecture, Aggrey gave the young Azikiwe a list of schools accepting black students in America. After completing his secondary education, Azikiwe applied to the colonial service and was accepted as a clerk in the treasury department. His time in the colonial service exposed him to racial bias in the colonial government. Determined to travel abroad for further education, Azikwe applied to universities in the U.S. He was admitted by Storer College, contingent on his finding a way to America. To reach America, he contacted a seaman and made a deal with him to become a stowaway. However, one of his friends on the ship became ill and they were advised to disembark in Sekondi. In Ghana, Azikiwe worked as a police officer; his mother visited and asked him to return to Nigeria. He returned, and his father was willing to sponsor his trip to America.

Azikiwe attended Storer College, a two-year preparatory school in Harpers Ferry, West Virginia. To fund his living expenses and tuition, he competed in athletics and on cross-country teams before transferring to Howard University in Washington, D.C. Azikiwe was a member of Phi Beta Sigma. He then enrolled at Lincoln University in Pennsylvania in 1930, receiving a master’s degree in religion in 1932. In 1934, he received a master’s degree in anthropology from the University of Pennsylvania.Azikiwe became a graduate-student instructor in the history and political-science departments at Lincoln University, where he created a course in African history. He was a candidate for a doctoral degree at Columbia University before returning to Nigeria in 1934. Azikiwe’s doctoral research focused on Liberia in world politics, and his research paper was published by A. H. Stockwell in 1934. During his time in America, he was a columnist for the Baltimore Afro-American, Philadelphia Tribune and the Associated Negro Press. Azikiwe was influenced by the ideals of the African-American press, Garveyism and pan-Africanism.