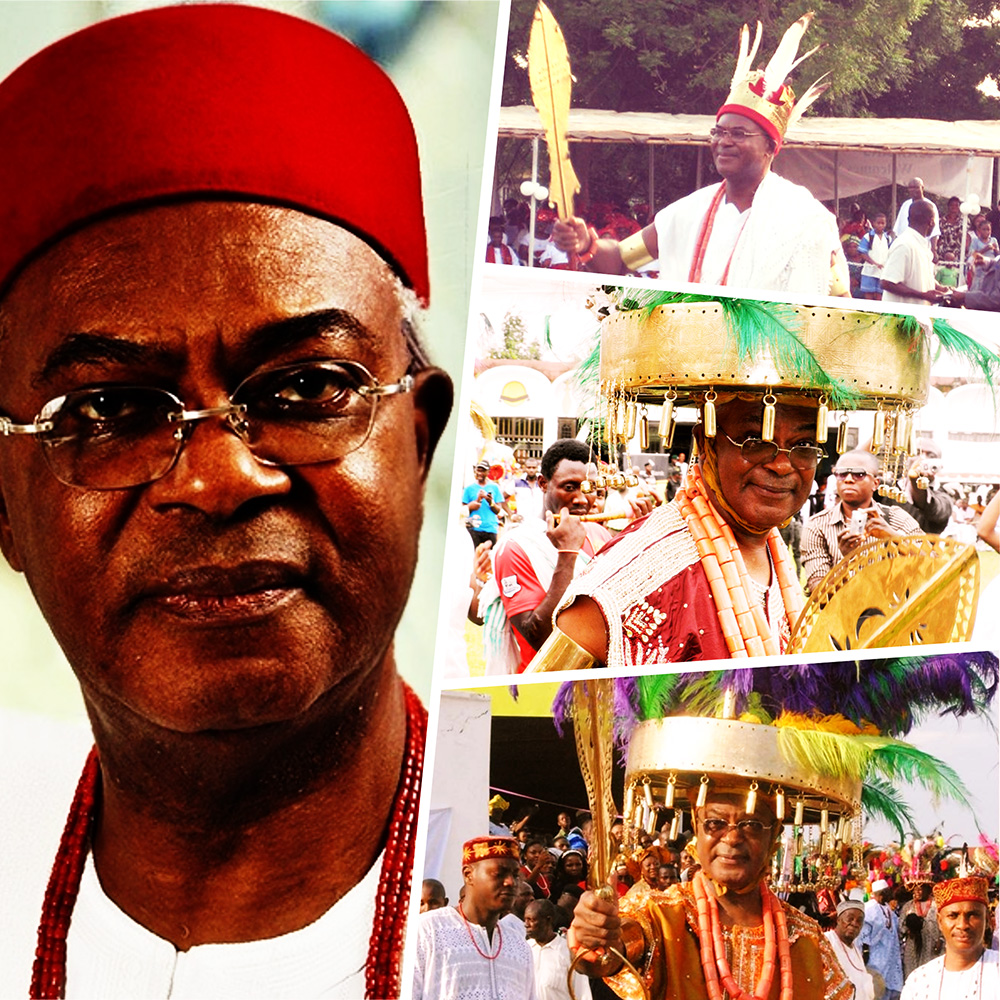 Igwe Nnaemeka Achebe was born in Onitsha on May 14, 1941, the first child of Akunne Anthony Chinwuba, and Chukwuebuka Winifred Ogbenyeanu, Achebe. He is a direct descendant of Ezechima, the founding monarch of Onitsha Ado N’Idu. He ascended the throne on May 14, 2002, as the 21st Obi of Onitsha, following a tradition that has been unbroken for more than 500 years.

Early in life, Obi Achebe had a sound preparation for life through his education and family upbringing. After primary and secondary schools in Nigeria, he gained admission into the prestigious Stanford University in California, USA, in 1963 where he took a bachelor’s degree in Chemistry. He also took a Master’s degree in Business Administration in the equally famous Columbia University in New York City. In 1979, he attended the maiden Senior Executive Course of the National Institute for Policy and Strategic Studies in Kuru, near Jos.

Following a brief working experience in the USA, Obi Achebe returned to Nigeria in 1972 to begin a long, varied and fulfilling career with the Shell Petroleum Development Company of Nigeria (Shell Nigeria) and the Royal Dutch Shell Group. Barely nine years after joining the company, Obi Achebe was appointed to the board of directors of Shell Nigeria as General Manager for the Eastern Division of the Company in 1981.

On his retirement from Shell Nigeria in 1996, Obi Achebe was appointed to Shell International in London, where he effectively acted as “ambassador at large” for the Shell Group on Nigeria matters. In that capacity, he travelled and lectured widely in all continents, including addresses to parliamentary committees in the European Union (EU), USA, United Kingdom, Irish Republic, Canada, Australia, and New Zealand.

Besides his long tenure as director of Shell Nigeria, Obi Achebe was also, during 1985 – 87, a director of several other Shell companies in the United Kingdom, the Netherlands, Ghana, Nigeria, Sierra Leone, the Gambia, Liberia, and Angola.

Outside Shell, Obi Achebe has held positions on the governing councils of the Petroleum Training Institute, Effurun, and the Nigerian Employers’ Consultative Association. In corporate life, Obi Achebe was chairman of Diamond Bank PLC and the Universal Insurance PLC and is currently the chairman of Unilever Nigeria PLC, Intafact Beverages Limited (SAB-Miller), and Omak Maritime Limited.

On two occasions, Obi Achebe has served the nation on panels of inquiry in the petroleum sector. In 1976, he was a member of the Administrative Panel of Enquiry on the Port Harcourt Refinery. In 2004, President Obasanjo called on him to be Chairman of the Presidential Enquiry into the February 2003 Fuel Shortage in the country.

On bilateral and multilateral relations, Obi Achebe has also represented Nigeria’s interests on social, cultural and commercial matters. He has been a member of the Nigeria-Britain Association (NBA) and a life member of the counterpart Britain-Nigeria Association (BNA). He has served as a member of the Governing Board of the BNA, the Advisory Board of the Britain-Nigeria Business Council, and the Board of Trustees of the Africa Centre, all based in the United Kingdom. On becoming a traditional ruler, the Africa Centre, in recognition of his services, made him one of its five Patrons, with Nelson Mandela as the Grand Patron.

Obi Achebe has a strong passion for education as a fundamental factor in national development. In his firm belief that lack of funds should not prevent any child from acquiring a good education, he set up early in his reign a manpower development trust fund for his community. In 2007, he, along with His Majesty, Oba Okunade Sijuwade II, the late Ooni of Ife, and His Majesty, Alhaji Ado Bayero, the late Emir of Kano, were guests of the Director-General of UNESCO in Paris to share thoughts on the strategic role of monarchs in promoting the development of science and technology. In 2008 and 2010, he addressed the annual symposium of the Nigeria Higher Education Foundation in New York City to promote partnership between the US and Nigerian universities. He became Chancellor of Kogi State University in 2010.

In recognition of his varied services to the society, Obi Achebe was decorated with the National Honour* of Commander of the Order of the Federal Republic (CFR) in 2004. He was appointed Chairman of the Anambra State Traditional Rulers Council in 2008; made an Honorary Fellow of the Nwafor Orizu College of Education in 2008; and awarded the degrees of Doctor of Laws (Ll D) Honoris Causa by the Anambra State University in 2008, and Doctor of Science (DSc) Honoris Causa by the Kogi State University in 2010.

The Insignia of Obi Nnaemeka Achebe

Obi Nnaemeka Achebe has as his theme “Peace and reconciliation based on truth and transparency as the foundation for sustainable development”.

Select a link to Read more

Agbogidi at the Ime Obi 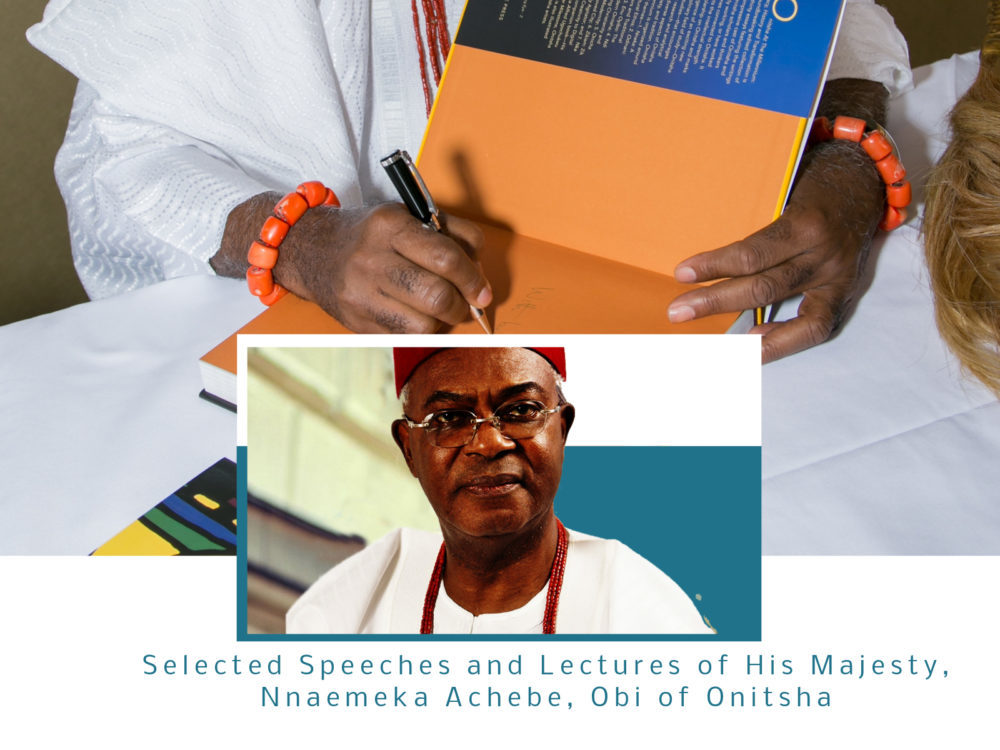 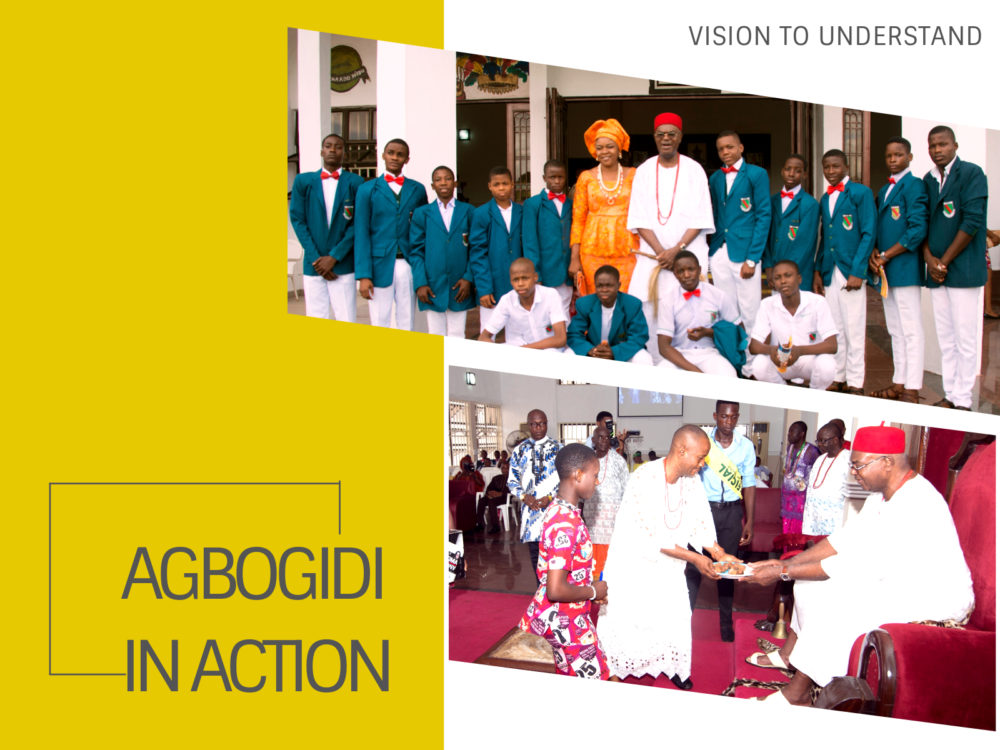