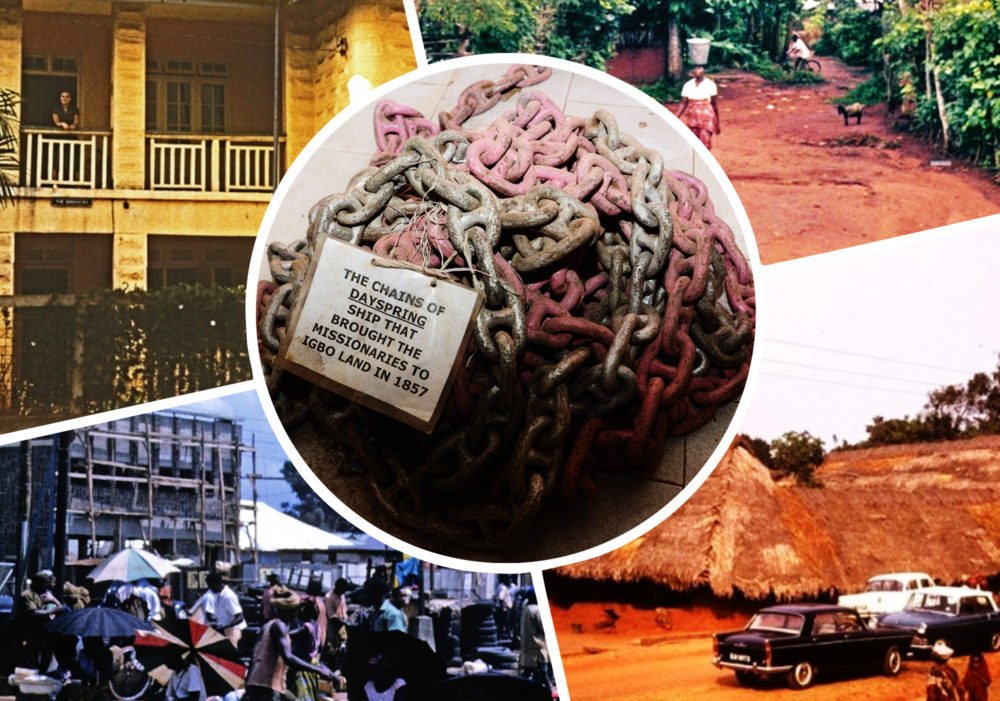 The history of how the Onitsha people got to their present location is in tandem with that of so many other towns that are found west of the Niger river.

Oral and documented historical evidence showed that they migrated from originally from Ile-Ife, with a long sojourn the old Benin Empire. Their migration was stimulated by the early fifteenth, -century* political upheaval in the Empire.

Traditional and cultural affinity shows that the migration took its course through the area much later known as the Mid-West and moved further toward the great River Niger. The exodus was said to have been led by one of the then Benin Empire warlords, Chima. This culminated in the discovery of many settlements and the blue-blood clan of Umuezechima (descendants of King Chima). Chima might have been forced to leave Benin, according to W. R. T. Milne in his intelligence report on Onitsha, because of a dispute over kingship in the year 1468.

As a dissident, and apparently out of defeat in the kingship tussle, Chima and his followers ostracized themselves from the empire and moved east towards the River Niger. In the course of the great movement, some of Chima’s loyalists settled in the neighbouring* towns of the present-day Onicha Ugbo, Onicha Olona, Ogwashi, Onicha Ukwu, and Asaba, among others.

All historical accounts of the Onitsha Kingdom showed that Chima, the arrowhead of the Umuezechima, unfortunately only sighted the Promised Land across River Niger, as he died in Obior, near the present-day Asaba town.

Oreze, one of the sons of Chima, apparently driven by his father’s quest to settle across the Niger, led some groups to cross and settle at the present-day Inland Town after defeating the Oze people in a series of communal wars.

Onitsha in the early '60s images by Richard Henderson

Otu Onitsha (Waterside) in the '60s

The British government, for the strategic importance of Onitsha in its commercial expedition, including slave trading, entered into an agreement with Onitsha people in 1857 to provide a steamer, a kind of worship, under Dr. Baikie’s supervision for the defense* of the town. Later in the same year, Bishop Ajayi Crowther joined the missionary expedition from Sierra Leone and established the Church Missionary Society in the town.

Following this and subsequent treaties between Onitsha and Europeans, numerous commercial ventures merged to form the Royal Niger Company in 1879. This prompted a re-invigoration of commercial and missionary activities in the town to the extent that, in 1905, Onitsha was made the political headquarters of the then Central Division, and in 1906, the British government laid the first telephone/telegraph cable across the River Niger to Onitsha.

The then traditional ruler of Onitsha, Obi Samuel Okosi I, was accorded with a certificate of recognition by the British government as the 17th Obi of Onitsha on the death of Obi Anazonwu in 1899.

Onitsha maintains its status as the commercial nerve center* of the South-east and South-south regions of Nigeria and is also a major trading location in West Africa. The Onitsha Main Market is one of the largest markets in West Africa. Most of the major import merchants from Eastern Nigeria have their head offices within the market. Traders from the ECOWAS sub-region, including Accra, Abidjan, Douala, Niamey, and Cotonou, massively patronize* the market.

Onitsha has also transformed into a modern urban society in the present-day Anambra State. It has a federal government college, an army cantonment and a school of metallurgy, to mention a few landmark institutions.

Turning to Christianity, Onitsha is also one of the earliest destinations of the early missionaries in Nigeria. The Anglicans were the first missionaries in Onitsha, in 1857. The Roman Catholics later came, in 1884. Onitsha served as the staging posts for these missionary groups as they spread Christianity among the Igbo-speaking people. Today, Onitsha houses the All Saints’ Cathedral, the headquarters of the Diocese on the Niger of the Church of Nigeria, Anglican Communion, and the Cathedral Basilica of the Most Holy Trinity, the seat of the Roman Catholic Archdiocese of Onitsha.

The Onitsha people were the first to embrace western education in the whole of the South-east of Nigeria. Some of the oldest post-primary educational institutions in the region, such as the Dennis Memorial Grammar School and the Christ the King College, founded in 1925 and 1933 respectively, are located in Onitsha. The town has produced quite a number of notable people like Dr. Nnamdi Azikiwe, popularly known as Zik of Africa. He was the first president of the post-independent Nigeria and the Owelle of Onitsha. Other notable indigenes of the town include Sir Louis Mbanefo, the first Igbo- speaking lawyer, Professor Chike Obi, the renowned mathematician, and Major Emmanuel Ifeajuna, Nigeria’s first Commonwealth Games gold medalist (high jump).

All Insights on Your Fingertips

Stay current with Ime Obi Onitsha latest New and Events of Onitsha and other topics you care about most.