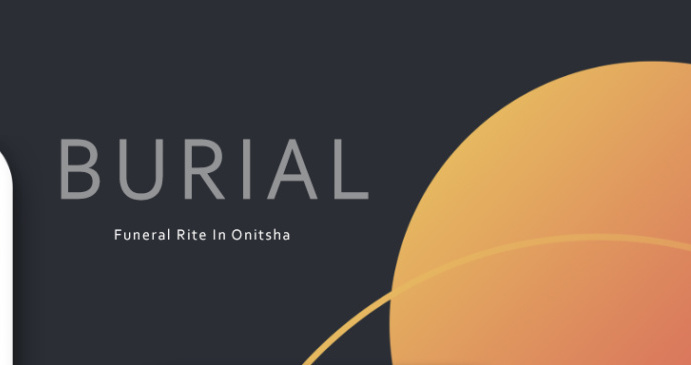 The burial ceremony is a very important ceremony in Onitsha. Giving a dead person a befitting burial is a duty of the living members of the deceased family. That is the reason the ceremony is done in a grand style. Children and unmarried young men are not given grandiose burial since they have not completed their mission on earth and are thus expected to reincarnate in order to complete their mission.

There are two major types of burial recognized in the town. These are the Christian burial and the traditional burial. In the Christian burial, the deceased is buried by the church. The daughters of the clan are present at the burial and perform their roles, but certain traditional rites are not performed. Second burials are also not given to people who are buried by the church.
The traditional burial is based on the dictates of the tradition of the land. This type of burial is conducted based on the status of the deceased. Thus, there are basically two types of traditional burial rites. These are the burial rites given to a person with a traditional title and burial rites given to a person without a traditional title. Once one is buried the traditional way, one is also expected to be given the second burial which would enable the soul of the deceased to get to the spirit world.
Because of the financial burden of funeral ceremonies, in modern times, the duration of the interment rites which used to run over two days, was reduced to one day: from dawn to dusk however, all the traditional rites expected to be performed are compressed within the stipulated time frame.